WHAT DOES THE BIBLE SAY ABOUT WHITE MAGIC?”

Ephesians 5:11 Take no part in the worthless deeds of evil and darkness; instead, expose them.

White magic is described as “good” magic, as opposed to black magic, which draws upon the powers of evil beings. Opinions vary as to the differences between black and white magic, ranging from the idea that they are two names for exactly the same thing, to the belief that they are completely different, especially in goals and intent. The Bible DOES NOT differentiate between “good” and “bad” magic. Magic is magic as far as the Bible is concerned. IT IS A COUNTERFEIT to the priesthood. Scripture doesn’t distinguish whether the magic is supposed to be used for good or for bad; it’s all forbidden because it appeals to a source of power other than God.

Throughout Scripture, in both the Old and New Testaments, all forms of witchcraft are in violation of God’s law and are condemned. (Deuteronomy 18:10–16; Leviticus 19:26, 31; 20:27; Acts 13:8–10). Pharaoh’s magicians used their “secret arts” to try to duplicate the miracles done by Moses and Aaron (Exodus 7:11; 8:7)—secret arts are the ceremonies or rituals sorcerers use to accomplish their magic, involving incantations, spells, magic words, charms, amulets, etc. Nowhere in the Bible is a practicing (OR ENTERTAINING WITH) sorcerers or magicians portrayed in a positive light.

Scripture says that God hates all magic, whether it is white magic or some other kind. Why? Because it doesn’t come from God. Satan deceives people by making them think white magic is beneficial. Satan pretends to be an angel of light (2 Corinthians 11:14), but his desire is to ensnare the souls of as many as he can.

“The Spirit clearly says that in later times some will abandon the faith and follow deceiving spirits and things taught by demons” (1 Timothy 4:1). Real spiritual power only comes from God, from a right relationship with Him through faith in Jesus Christ, and from the Holy Spirit who lives in the hearts of believers.

Why do we lust after and imitate that which is forbidden?

A complete list of bible scriptures AGAINST the use of magic : https://www.kingjamesbibleonline.org/Bible-Verses-About-Wi…/ 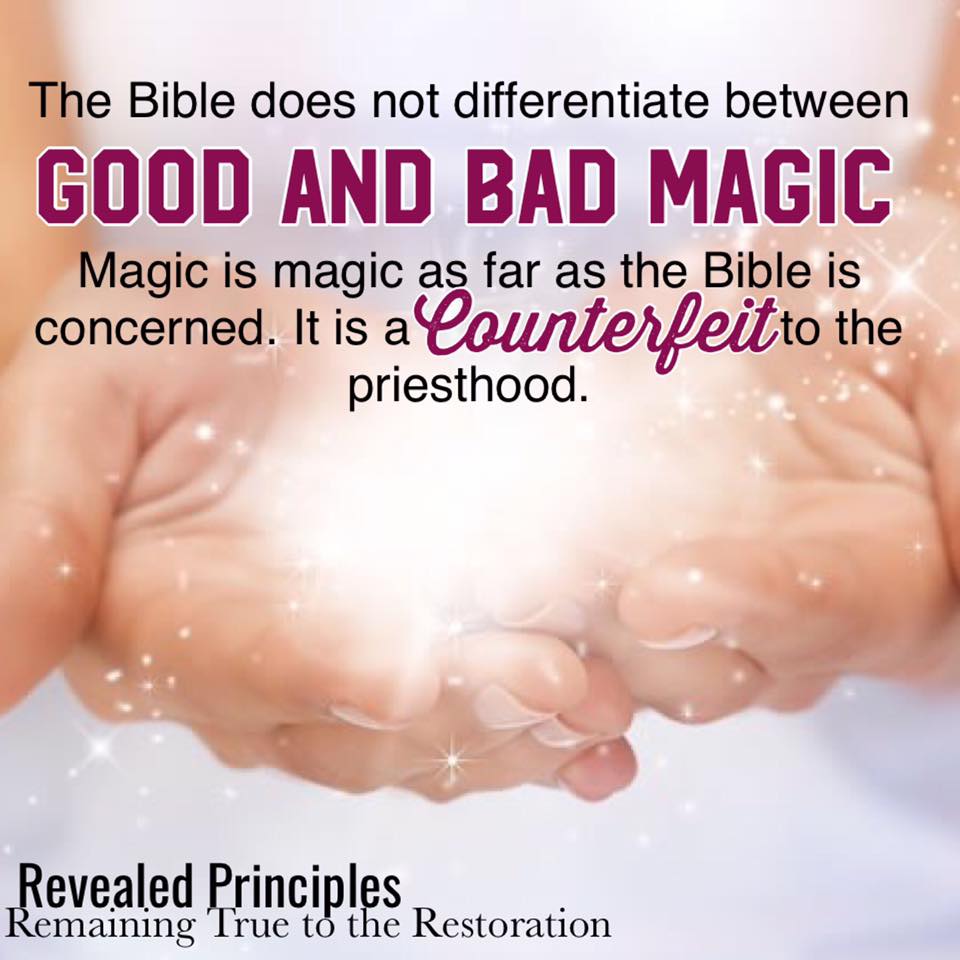 Published by Revealed Principles- Remaining True to the Restoration